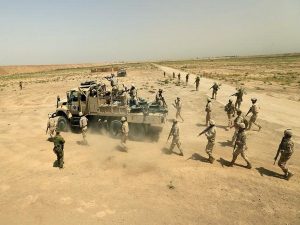 Iraqi security forces battling against the Islamic State (IS) militants entered into the first urban areas to expel the IS militants from the city of Tal Afar in Iraq’s northern province of Nineveh, the Iraqi military said according to aninews.in.

Lt. Gen. Abdul-Amir Yarallah from the Joint Operations Command said in a brief statement that the commandos of the Counter Terrorism Service forces initiated a new drive into the neighborhood of southwestern Tal Afar’ Kifah, as serious clashes against the extremist militants continued during the day, Xinhua reported.

Meanwhile, the Iraqi army’s 9th Armored Division teamed up with the paramilitary members of Hashd Shaabi units and broke into the eastern side of the city under violent clashes with the IS militants, Yarallah said in a separate statement.

The Hashd Shaabi intelligence said in a report that the IS group is weak and its militants are running away to the center of the city instead of confronting the security forces.

The International Organization of Migration (IOM) said that since August they have received nearly 3,200 people.

“Thousands more are expected to flee in the coming days,” IOM, the UN migration agency, said in a statement.

It said that the majority of people from Tal Afar “had to walk for hours in arduous conditions before reaching safe areas. Many arrived exhausted and in poor health, often with critical levels of malnutrition among children, some unable to move.”

On August 20, Iraqi Prime Minister Haider al-Abadi, who is also the Commander-in-Chief of Iraqi forces, confirmed the start of an operation to retake control of the northern city Tal Afar and nearby areas from the captivity of the IS militants.

“We announce the launch of an operation to liberate Tal Afar. I say to Daesh (IS militants) — either you surrender or die,” Abadi said.

Tal Afar, approximately 70 km west of Mosul, is the last IS redoubt in the northern Iraqi province of Nineveh. Up to 350,000 to 400,000 people used to live in the city and surrounding areas, including 250,000 people in Tal Afar. But now most of them has left their homes either due to the sectarian trouble during the years after 2003, or after the city fell to the IS in 2014, Xinhua reported.

Earlier, the army’s Major General Najim al-Jubouri, commander of Nineveh‘s Operations Command, told the reporters that there were between 1,500 and 2,000 IS militants left in Tal Afar.