You are here: Home / MidEastGulf / Iraqi Kurds and Shiites preparing to push Islamic State away from Kirkuk region 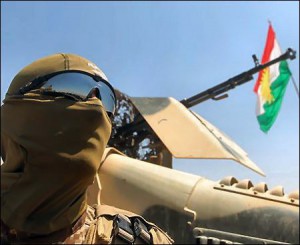 Kurdish Peshmerga forces, an Iran-backed Shi’ite militia and Iraq’s army will launch an offensive soon to push Islamic State fighters away from the northern oil region of Kirkuk, a state newspaper reported on Wednesday.

The operation would bring the combined forces closer to Mosul, the largest Iraqi city still held by Islamic State, which also controls parts of neighbouring Syria.

They agreed plans to take back territory stretching from Kirkuk and Baiji, to al-Shirqat, it said.

The Shiite delegation also met with the governor of Kirkuk, Najim al-Din Kareem and Peshmerga leaders to discuss the operation to free Bashir region and preparations for freeing south and west areas of Kirkuk .

The oil city of Kirkuk is under Peshmerga control while Baiji, which has an oil refinery, is held by the Badr Organisation, the largest component of the Shi’ite Popular Mobilisation Forces coalition that assembled in 2014 to fight Islamic State.

The oil-rich province of Kirkuk is one of the most disputed areas by the Kurdistan regional government and the Iraqi government in Baghdad.

The Kurds are seeking to integrate Kirkuk province into the semi-autonomous Kurdistan Region clamming it to be historically a Kurdish city. Kurds have a strong cultural and emotional attachment to Kirkuk, which they call “the Kurdish Jerusalem.” Kurds see it as the rightful and perfect capital of an autonomous Kurdistan state.

The Kurds took full control of Kirkuk in August 2014 as the Iraqi army collapsed in the north and Islamic State militants overran almost a third of the country.