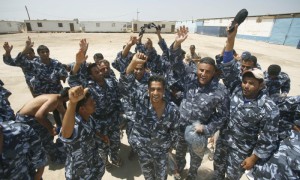 The Iraqi government increased its recruitment of volunteer troops to join the fight against the Islamic State on Tuesday, as government forces repelled attacks by ISIS militants on the town of Khaldiyah, just east of Ramadi. Iraq’s Council of Ministers also said the Shiite-led government will “recruit and arm” Sunni Muslim tribesmen in Anbar province, the Los Angeles Times reported.

Pro-government forces, mostly Shiite militias, have been accumulating near Khaldiyah in preparation for a wide-scale offensive to retake the city of Ramadi in central Iraq. The Islamic State group, also known as ISIS or ISIL, captured the provincial capital of Anbar on Sunday night after eyeing the Sunni city for months and making strategic moves in the surrounding area. In its promise to provide assistance to Iraq’s Washington-backed government, the U.S. military has ramped up airstrikes against ISIS fighters in the Ramadi area.

Losing Ramadi to the Islamic State has forced Iraqi Prime Minister Haidar al-Abadi to call upon the Shiite militias to join the campaign to eject ISIS from Anbar province. Abadi claimed the militias were necessary to fight ISIS, although the White House asserts otherwise.

Officials feared that deploying the Shiite fighters in the Sunni-dominated region could bring added danger and deepen Iraq’s Sunni-Shiite divide. Anbar was the heart of the Sunni insurgency against American forces following the fall of Saddam Hussein’s regime in 2003, the Los Angeles Times said. Many residents in Anbar distrust Iraq’s Shiite-led government and the allied Shiite militias, the Associated Press said.

ISIS militants killed more than 500 Iraqi Security Forces and civilians over the weekend and on Monday as Ramadi fell to the Islamic State. Some 40,000 people have been forced to flee Ramadi since May 15, according to the International Office of Migration, an intergovernmental group that aids migrants.