The Iraqi Federal Police forces managed to capture a headquarters of the Daesh (ISIS or ISIS) terrorist group in the northern city of Mosul, like reported by tasnimnews.com 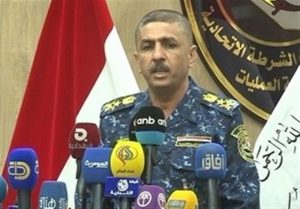 Iraqi Federal Police Chief Lieutenant General Shaker Jawdat announced that as part of a massive offensive to retake the last major stronghold of Daesh terrorists in the Arab country, his forces retook full control over a command post of the militants in the city’s west.

He added that in the operation, the Iraqi forces seized explosives, a number of weapons and communications equipment from the terror group, the Arabic-language al-Forat news agency reported.

Earlier, Iraqi forces managed to liberate the Badush Bridge in western Mosul and a water plant in the area, according to Abdulamir Rashid Yarallah, the commander of the liberation operation for the city.

The Iraqi air force was also providing air cover to the soldiers operating on the ground against Daesh elements.

The United Nations said Wednesday that around 45,000 people have fled the fighting between Iraqi forces and Daesh terrorists in western Mosul over the past week, a 22 percent increase from the previous week.

Iraq has been facing the growing threat of terrorism, mainly posed by Daesh.

Daesh militants made swift advances in much of northern and western Iraq over the summer of 2014, after capturing large swaths of northern Syria.

However, a combination of concentrated attacks by the Iraqi military and the volunteer forces, who rushed to take arms after top Iraqi cleric Ayatollah Ali al-Sistani issued a fatwa calling for fight against the militants, blunted the edge of Daesh offensive and later made the terror group withdraw from much of the territories it had occupied.