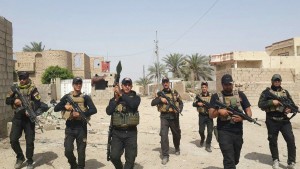 Iraq’s Police Chief Major General Shaker Jowdat declared on Tuesday that his forces drove ISIL out of a base used by the terrorists for recruiting fresh forces in Mosul after hours of non-stop clashes, according to farsnews.com .

Jowdat said that the Iraqi police forces stormed ISIL’s positions in the Palestine neighborhood in Western Mosul and captured the militants’ recruitment center, inflicting several casualties on them.

He further added that the ISIL terrorists have fled their positions in the village of Yarmajeh towards the right bank of the Tigris River.

The Iraqi forces have so far managed to purge 80 percent of Eastern Mosul of ISIL terrorists.

The Iraqi Army’s Intelligence Department announced earlier today that five ISIL commanders, including a top aide of the terror group’s Chief Abu Bakr al-Baghdadi, have been killed in an Iraqi air force raid in Mosul.

The Iraqi army announced in a statement that five ISIL commanders, including Abdul Wahed Khazir Sayer al-Jow’an known as Abu Loi, a senior aide to al-Baghdadi were killed in the airstrike in Eslaah Arazi region.

Manager of the Traffic Department Ahmad Khazir Sayer, Manager of Agricultural Department of the towns of Tal Afar and al-Mahlabiyeh nom de guerre Abdul Karim Khazir Sayer al-Jow’an have also been among the hunted commanders, according to the Iraqi army.