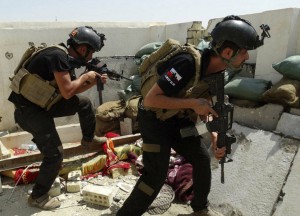 The troops also regained full control of al-Taash and al-Humeriyah areas south of Ramadi after driving out IS militants, the source said.

The battles in south Ramadi resulted in the death of 20 IS militants along with the destruction of six of their vehicles, the source added.

Meanwhile, security forces and Hashd Shaabi paramilitaries repelled an IS attack by four suicide truck bombs near the troops’ positions at the al-Haiyakel area south of the IS-held city of Fallujah, 50 km west of Baghdad, the source said.

The troops detonated the vehicles killing the suicide bombers, the source said without giving further details about casualties among security forces and paramilitaries.

Also in the province, fierce clashes erupted in the early hours of the day outside the militant-seized town of Garma, east of Fallujah, when IS militants backed by suicide car bombs attacked security forces and Hashd Shaabi positions, the source said, adding there were no immediate reports about casualties.

The security forces’s rapid retreat and the fall of Ramadi was viewed as a setback to Prime Minister Haider al-Abadi’s goal to defeat IS in Anbar and then free the IS-held city of Mosul in the north.