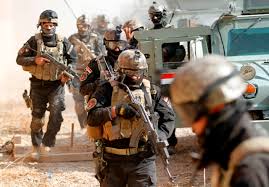 Iraqi special forces say heavy fighting has broken out in Mosul’s eastern Tahrir neighborhood, where a suicide car bomber set off explosives that disabled an Abrams tank belonging to the Iraqi army.

Brig. Gen. Haider Fadhil says the special forces now control 70 percent of the district, which is still full of most of its residents. The army is trying to evacuate them.

Fadhil says the troops have killed dozens of militants, and are advancing carefully to try spare civilians from getting caught in the crossfire.

In the same district, security forces arrested four IS militants, two Iraqis and two non-Iraqi Arabs who surrendered, locking the men in the back of a Humvee.

The men were blindfolded and had their hands bound behind them. Some wore traditional Arab clothes, called dishdasha, and others wore tracksuits.

A spokesman for an influential Shiite militia taking part in the Iraqi government’s operation to retake Mosul says his fighters have pushed deeper into areas west of the Islamic State-held city.

Jaafar al-Husseini of the Hezbollah Brigades says fierce clashes were underway Wednesday at the perimeter of the Tal Afar military airport. He did not elaborate.

The Lebanon-based al-Mayadeen TV broadcast footage showing thick black smoke rising from the airport as armored vehicles and troops were seen deploying nearby. The troops were also seen blowing up a speeding suicide car bomb before its driver managed to detonate the explosives’ load.

The Shiite militias are leading an assault to drive IS from Tel Afar, which had a majority Shiite population before it fell to the militants in the summer of 2014.