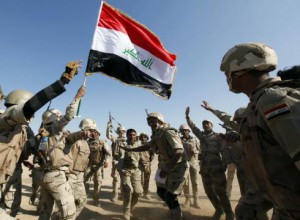 The Iraqi army and volunteer forces have started a major military operation against the ISIL terrorists in the militant-besieged city of Fallujah in central Iraq, Press TV reports.

The operation began on Wednesday targeting the terrorist group, which wrested control of the city in June. Fallujah is considered to be one of the group’s strongholds in Anbar Province, which sprawls over much of Iraq’s western and central territory.

Volunteer forces have announced the killing of 30 ISIL terrorists in the operation, most of whom foreigners, after firing rockets and missiles towards their hideouts in a neighborhood southeast of Fallujah.

Officials have said the ISIL militants threw the bodies of the dead terrorists into the river in order to hide their identities.

“In the Anbar operations, the army is trying to move carefully and slowly for the geographic nature of the province is different from other areas in Iraq,” said political analyst Ahmad al-Sahrifi.

The northern and western parts of Iraq have been in chaos since ISIL started its campaign of terror in early June 2014. The terrorists are in control of the major city of Mosul and have swept through parts of the country.