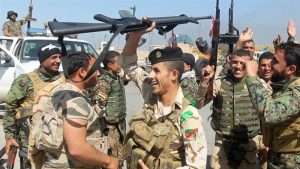 Iraqi government forces killed on Thursday an Islamic State explosives official while moving inside a district adjacent to Mosul’s Old City, the group’s last bastion, like reported by iraqinews.com .

Shafaq News quoted security sources saying that troops killed Abu Furqan al-Maswseli along with 15 others at a house in al-Shifa district.

The Iraqi command said earlier this week its forces had consummated the recapture of al-Shifa, a home to major health and medical facilities, thus putting the medieval Old City under full siege.

Iraqi troops have advanced on Wednesday closer to the Grand Nuri al-Kabir Mosque, where Islamic State’s supreme leader Abu Bakr al-Baghdadi declared the establishment of the group’s rule in 2014. IS members blew up the mosque’s ancient minaret on Wednesday as troops advanced, a move which the Iraqi command said signalled an imminent defeat to the extremist group.

A few hundred militants are thought to remain inside the Old City, but are holding at least 100.000 civilians who are shot dead or caught and executed while trying to flee the neighborhood.