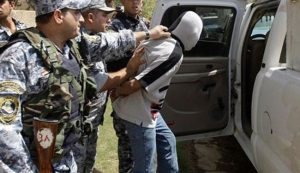 Iraqi army forces killed and arrested 12 Islamic State  militants northwest of Mosul, a commander in Nineveh province was quoted saying, according to iraqinews.com.

Baghdad Today quoted Emad al-Bayati, head of the army’s Nineveh Operations’ media, saying that border security troops engaged with the militants at Yaaribi border area with Syria, killed seven and arrested five others after setting up an ambush.

He added that the troops seized the militants’ weapons and took the arrested ones for interrogation.

Iraqi troops, backed by a U.S.-led coalition, took over Mosul from Islamic State militants early July, ending more than eight months of operations. Since then, security forces have launched efforts to clear the city from dormant IS cells and occasionally sustained attacks from militants, while arresting others among refugees.

Mosul was the birthplace of the Islamic State’s self-styled “caliphate” when the group’s founder, Abu Bakr al-Baghdadi declared its establishment in a famous sermon from Mosul’s Grand Nuri Mosque.

Iraq forces are currently working on seizing back the group’s last haven in Iraq: the western Anbar city of Rawa on the borders with Syria.

The war against IS has so far displaced at least five million people.