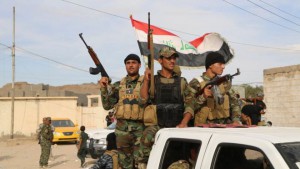 Iraqi forces have “totally encircled” the government complex of Ramadi, the last stronghold of Islamic State militants (aka ISIS) in the western city, and are about to enter it, joint operations command spokesman Yahya Rasool told Reuters.

“We’re clearing the buildings and streets around the complex of bombs in preparation to go in,” he said.

“I expect we will go into the complex in about an hour,” he added.

Recapturing Ramadi, a mainly Sunni Arab city that fell to the militants in May, would be one of the most significant victories for Iraq’s armed forces since Islamic State swept across a third of the country in 2014.

Earlier this month, Defense Secretary Ash Carter said the US will assist the Iraqi army with more personnel and attack helicopters to help it fight ISIS militants, especially in the battle to retake Ramadi.

While capturing Ramadi would be a significant victory for the Iraqi forces, experts at the Institue for the Study of War have outlined some challenges:

Ramadi will remain exposed to counter-attacks by ISIS, particularly from the north from ISIS-held Hit district, if the ISF shifts forces away from Ramadi to focus on other operations. Large sections of the city suffered heavy damage during the operation, and resettling internally-displaced persons may prove to be both a logistical and a security challenge.

Finally, it is unclear who will ultimately hold and secure Ramadi against counter-attacks by ISIS. The ISF have stated that local tribal forces and local police would secure recaptured areas, but ISF formations will also be required to hold the area.

It remains uncertain whether those formations are responsive to the Iraqi government or consist of forces loyal to Iranian proxy militias.