You are here: Home / MidEastGulf / Iraqi forces gear up to free last major IS stronghold in Mosul 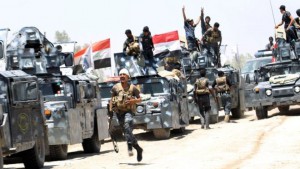 Iraqi security forces on Tuesday launched an operation to flush out Islamic State (IS) militants from the town of Qayyara in south of IS major stronghold in Mosul, a security source said.

The troops backed by Iraqi and U.S.-led coalition aircraft began the advance at dawn from several direction toward Qayyara, some 50 km south of Mosul, amid heavy clashes with IS militants at the entrances of the town, the source told Xinhua on condition of anonymity.

Last month, the security forces made a significant victory when they recaptured a strategic airbase near Qayyara.

Recapturing the town is vital for the security forces which will use the town and the nearby airbase as a staging ground to free Iraq’s last major IS stronghold in Mosul, which itself located some 400 km north of the Iraqi capital of Baghdad.

The advance into Qayyara is part of a major offensive aiming to free areas in southern Mosul and surround Mosul from the south and east before pushing into the city and flushing the IS militants out of it.

Mosul, the second largest city in Iraq, has been under the IS control since June 2014, when the Iraqi government forces abandoned their weapons and fled, giving opportunities for the IS militants to take control of parts of Iraq’s northern and western regions.