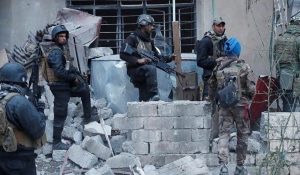 A top Iraqi commander announced that the country’s security forces are now in control of 90 percent of territories in Western Mosul as operations entered a fifth month to retake Iraq’s second largest city from ISIL militants.

Major General Najm al-Jubouri, head of the Joint Operations Command’s Mosul operations, said in a statement  that his troops have become in control over 90 percent of the “Western axis”, and continue to advance in Central Mosul, Iraqi News reported.

Troops are currently preparing to retake “the remaining regions where ISIL is positioned” in Tamuz(July), Refaie, Mesherfa and Hamodun districts.

Iraqi government forces, backed by their allies, recaptured Eastern Mosul from ISIL in January after three months of fighting, and launched another offensive mid February to retake the Western half of the city.

Dozens of ISIL senior leaders died in airstrikes and ground offensives over the past few days.

Troops have been struggling to fully retake central Mosul’s Old City, a densely-populated and structured area which generals view as vital for victory over ISIL.

Iraqi generals, though admitting the difficulty of the battle for the western region, said ISIL powers were waning, and that its members had no choice but to fight to death.