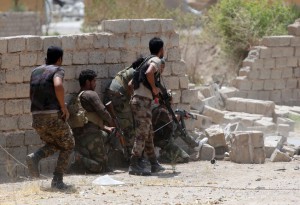 Iraqi security forces entered the University of Anbar in southern Ramadi on Sunday and clashed with Islamic State militants inside the compound, the joint operations command said in a statement broadcast on state television.

Security forces and militia groups launched an offensive in April in the western province of Anbar, Iraq’s largest, to retake the Sunni heartland from Islamic State, but progress has been incremental.

“We announce to you the entry of the counter-terrorism forces into the University of Anbar. They are now engaging in battles to clean it up from the remains of Daesh and dismantling bombs and clearing roads,” the statement said, using a pejorative term for the radical Sunni insurgents.

Security forces advancing towards the nearby district of al-Tamim had encountered Islamic State positions enforced by bombs and razor wires, the statement said.

Anbar provincial council member Falih al-Essawi said special forces, army and federal police had managed to enter the university compound early on Sunday supported by intense bombing from U.S.-led coalition warplanes, which have been carrying out strikes in Iraq and neighbouring Syria since August 2014.

“Government forces are tactically in full control of the university compound. They seized the opportunity of retreating Daesh fighters to make more advances towards al-Tamim district in southern Ramadi,” Essawi told Reuters.

He said no members of the Hashid Shaabi, the Iran-backed Shi’ite paramilitary groups which Washington has refused to coordinate with, had participated in the university operation.