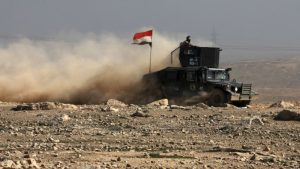 Iraqi security forces launched a military operation near Mosul on Monday, arresting 22 people suspected of links to the Islamic State (IS), the Defence Ministry said, according to basnews.com.

The operation was carried out in Badush district of northwestern Mosul, where a tunnel of IS was also discovered and destroyed, ministry’s spokesman Yahya Rasoul said in a statement.

At least ten improvised explosive devices were also seized and defused, according to the statement.