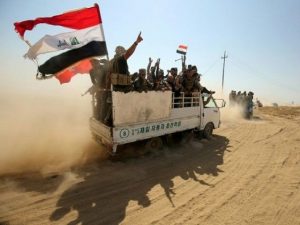 Iraqi forces backed by the US-led coalition began a major operation Wednesday against Islamic State (IS) group jihadists hiding out in a northeastern desert region, the military said according to dailymail.co.uk.

The army, rapid intervention forces and paramilitaries, in coordination with Kurdish fighters and with Iraqi and coalition air cover, launched the operation east of Tuz Khurmatu “to chase away IS remnants,” said Iraq’s Security Information Centre.

Iraqi forces retook several villages and stormed an IS camp, according to the rapid intervention forces.

The operation met no initial resistance, an AFP journalist at the scene said.

Iraq declared victory against IS in December, more than three years after the extremist group seized a third of its territory and swathes of neighbouring Syria, declaring a “caliphate” ruling over millions of people.

Jihadists are still active, however, and there have been several attacks against government forces in the Khurmatu region.

Authorities have blamed not just IS but also pro-independence Kurds accused of seeking revenge for the takeover by government forces of Kirkuk province, in particular the expulsion of many Kurds from the Tuz Khurmatu area.

The town is home to a mixed Kurdish, Arab and Turkmen population. It was the scene of deadly violence in mid-October when Iraqi forces retook it in response to a Kurdish independence referendum.