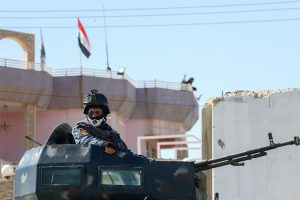 At least 60 percent of the embattled western half of Mosul has been retaken from the Islamic militants and the remaining is besieged on three fronts, like reported by rudaw.net. Progress has, however, slowed around the old town and one pundit believes that the military should shift their strategy and open a new front from the north.

The Iraqi Federal Police and Rapid Response Force have been advancing from the south and east of the Old Mosul district and the Counter-Terrorism force from the west. The operation is proceeding slowly so that, while the advancing forces are just a few hundred meters away from the al-Hadba Minaret and Nur Mosque and have had it in its sites for nearly it month, it remains uncontrolled. Some reports indicate that the progress has stopped entirely after more than 130 civilians were killed in one incident last month.

Brig. Gen. Yahya Rasoul, spokesperson of the Joint Operations Command, told Rudaw that “the operations have not stopped at all. The thing is that our forces are advancing very cautiously and carefully in order to protect the lives of civilians, especially in the densely populated areas narrow alleys and old houses.”

Another military official confirmed to Rudaw that the operation is unfolding as they brought two more neighborhoods under control on Monday, including Sikak and Yarmouk neighborhoods.

“The Iraqi flag has been hoisted on the neighborhoods’ buildings,” said Abdulamir Rashid Yarallah, commander of the ‘We are Coming Nineveh’ operation, adding that the enemy has lost a significant amount of equipment and manpower.

The Iraqi forces are adjusting their tactics in order to protect the civilian population and prevent ISIS from using residents as human shields, the coalition’s spokesperson told Rudaw TV on Monday.

ISIS has used routinely human shields as it has lost territory across Iraq and Syria. In west Mosul, the extremist group has been doing this to deadly effect.

On March 17, more than 130 civilians were killed in an explosion likely caused by a coalition airstrike that destroyed a house where ISIS had reportedly gathered civilians.

An investigation into the incident is ongoing and the results will be “transparently” released, Dorrian stated.

“It breaks our hearts when civilians are killed in the battle for Mosul. This is something the enemy has tried hard to increase. And it’s a disgusting and despicable tactic on their part. They are hiding behind women and children; it’s a cowardly act,” said Dorrian.

“There are hundreds of thousands who are being held hostage by ISIS, and they need to be freed. We are going to concentrate on that,” Dorrian stated, vowing to capture or kill the militants.

Majid Jasim al-Qaiasi, a military and strategic expert, told Rudaw he believes there are two reasons for the slowed advances. One is last month’s mass civilian casualties. The other is the difficulty of fighting in the old city as ISIS continues to use suicide bombers, car bombs, tunnels, and hide behind civilians as human shields. In addition, many of the group’s foreign militants not ready to surrender despite being besieged for many days.

Commenting on the changes in their military tactics, Rasul explained “probably changes will be made in our plans. If need be, we will make changes in any area we want.”

He added that to date, more than 60 percent of west Mosul has been reclaimed from ISIS and, in the near future, the full liberation of the city will be declared.

Shakir Jawdat, commander of the Federal Police explained “274,000 square kilometers have been cleared of ISIS in west Mosul.”

The fighting is ongoing on three fronts in intense alley-to-alley clashes. The two sides are so close they can hear each other.

The Old Mosul district, home to the Nur Mosque, also known as the Great Mosque, and the al-Hadba Minaret, are strategically important, al-Qaiasi said.

“Controlling this district completely does not only mean the end of Mosul fight and the demise of ISIS in Mosul, but ending the caliphate project. Even though it is a religious symbol, ISIS used to issue orders upon the people from this mosque.”

The military strategist believes that a new front should be opened against ISIS in the north and northwestern sides of west Mosul, leaving the Old Mosul district as the last area to battle for.

“The plan to re-control Mosul has to be reviewed by opening a new front of fight against ISIS in the north and northwestern parts of the right bank,” he advised, “leaving Old Mosul besieged until all the other areas of west Mosul have been cleared out.”

However, he said, opening up a new front needs more supplies and reinforcements as a large number of civilians will be displaced.

The Iraqi army has recently been relying on unmanned drones, as they are less destructive when hitting ISIS targets.

An Iraqi official explained to Rudaw that a total of 512 ISIS militants have been killed by their drones.

“The drones have killed 512 ISIS militants on the right side of Mosul, including 77 marksmen,” said Jawdat, the Federal Police commander. The drones “have also destroyed 256 car bombs and 162 motorcycles.”