You are here: Home / MidEastGulf / Iraqi court sentences 24 to death over Speicher killings 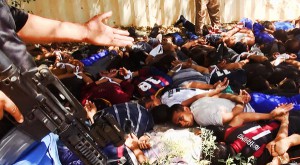 An Iraqi court sentenced 24 people to death on Wednesday over the killing of hundreds of soldiers at a former U.S. military base near Tikrit during an offensive by Islamic State militants, an official said.

As many as 1,700 mainly Shi’ite soldiers were killed at Camp Speicher when the hardline Sunni Islamist militants swept through northern Iraq last summer.

Video footage of the soldiers being gunned down in their hundreds, posted online by jihadists, came to symbolise Islamic State brutality and may represent the deadliest single act of violence during a decade of periodic sectarian war in Iraq.

“Today the Iraqi central criminal court issued a death sentence against 24 people convicted of the Speicher massacre, based on article 4 of the terrorism law,” said Abdul-Sattar al-Birqdar, spokesman for Iraq’s Supreme Judicial Council.

He said all those who were tried and sentenced on Wednesday were Iraqi nationals. Another 604 suspects wanted in connection with the killings remained at large, he said.

Iraqi soldiers and Shi’ite militia fighters recaptured Tikrit from Islamic State three months ago, allowing the start of exhumation at the site of 12 suspected mass graves thought to contain the bodies of the slain soldiers.