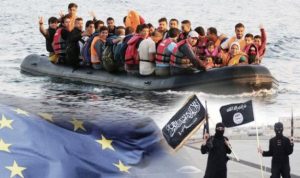 Police in Italy on Monday arrested a 29-year-old Iraqi asylum seeker for supplying news and materials in support of Daesh and saying that those who do not believe in Islam, “should have their throats cut”, reported Reuters.

According to a statement released by police, a southern Italian court ordered the man’s arrest for conspiracy to commit international terrorism and inciting others to break the law.

The man sought to convince other asylum seekers living in a state-funded shelter in the southern city of Crotone to “perpetrate acts of violence with terrorist objectives”, the police said.

“The Iraqi, considered violent and inclined toward criminal activity, had celebrated after the recent terrorist attack in Manchester,” police said, referring to a suicide bombing last month at a pop concert in the northern English city that killed 22 people, said Reuters.

In a recorded telephone conversation between the arrested man and his sister, he said he had been called to join the “holy war” in his country, but had decided instead to stay in Italy to “redeem the infidels” who “should have their throats cut”, it added.