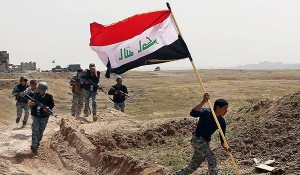 The Iraqi army has taken back control over the Southern and Western parts of the city of Tikrit and broken the ISIL terrorist group’s fortified line of defense in the area, Iraqi Prime Minister’s Office announced on Tuesday.

“Our forces have reached the Center of Tikrit after winning back control over Southern and Western parts of the city,” Al-Sumeriya news cited a statement by the Iraqi prime minister’s office on Tuesday.

The Iraqi army also inflicted heavy casualties on the ISIL terrorists in Tikrit, and succeeded in liberating the city’s School of Medicine from the control of the Takfiri group.

According to reports on Monday, the army soldiers made headway in their fight against the ISIL in Tikrit after killing more than 36 terrorists, and raised the national flag over the building of the medical center.

Iraqi military forces, backed by Shiite and Sunni volunteer fighters, have won control over 90 percent of Tikrit after inflicting hefty losses on the ISIL.

Some 30,000 Iraqi troops and thousands of allied Shiite and Sunni militias have been involved in a month-long operation to recapture Tikrit and other key towns and villages in the Northern part of Salahuddin province from the ISIL militants.

On Monday, Iraqi Prime Minister Haidar Al-Abadi announced that his country’s forces are very near to winning back full control over Tikrit, adding that Mosul and Al-Anbar will be the next stop.

“The Iraqi troops are in the final battles for retaking control of Tikrit in Salahuddin province,” the Iraqi prime minister said after meeting UN Secretary General Ban Ki-moon in Baghdad on Monday.

Al-Abadi underlined that the Iraqi troops will try to regain control of Mosul and Al-Anbar in the next stage of their operations after Tikrit.