You are here: Home / MidEastGulf / Iraqi army says it is advancing on Isis fighters in Ramadi 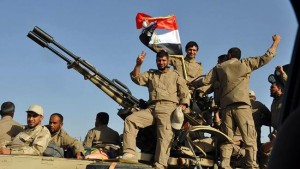 Iraq’s military has said its forces have advanced on three fronts to begin clearing Islamic State militants from the western city of Ramadi, which security forces have been encircling for months.

However, a municipal official and a police officer at a nearby military base said the advance had not begun. Reuters could not independently verify the opposing accounts due to insecurity and poor communication in the area.

Iraqi forces appeared better positioned this week to launch an offensive on Ramadi, 60 miles west of Baghdad, after a month-long effort to cut supply lines to the city.

The fall of Ramadi, the capital of Anbar province, to Isis in May was the biggest defeat for Iraq’s weak central government in nearly a year, damping its hopes of routing the Sunni militants from the country’s north and west.

Retaking the city of 450,000 would provide a big psychological boost to Iraqi security forces, who have mostly collapsed in the face of advances by Isis, which last year seized a third of Iraq.

It would also increase pressure on the jihadi group, which is facing multiple fronts in neighbouring Syria and appeared to be largely pushed out of the northern Iraqi town of Sinjar on Friday by Kurdish forces backed by US-led coalition air strikes.

The Iraqi forces began “their advance to liberate Ramadi … from three directions: the west, the north and the southwest, supported by [the air force] who are currently striking selected targets”, said a statement from joint operations command broadcast on state television.

The offensive has been impeded by heavy use of improvised explosive devices, inadequate troops and equipment due to government cash shortages, and stringent rules of engagement for US-led air strikes, according to military and federal police officers involved in the battle.