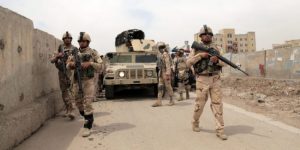 The Iraqi army has repulsed an Islamic State attack, leaving many militants killed in Salahuddin province, a security source said  to iraqinews.com.

Speaking to Alghad Press, the source said, “the Iraqi army foiled an attack by Islamic State in al-Aitha region, east of al-Dour town, from five regions. The attack left five army personnel killed and others wounded.”

Salahuddin Operations Command, according to the source, “killed 14 Islamic State members, wearing suicide belts, and followed the militants which carried out the attack.”

A total of 79 Iraqi civilians were killed and another 99 injured in acts of terrorism, violence and armed conflict in Iraq in July 2018, according to casualty figures recorded by the United Nations Assistance Mission for Iraq (UNAMI).

Thousands of militants as well as Iraqi civilians were killed since the government campaign, backed by paramilitary troops and the coalition was launched in October 2016 to fight the militant group, which declared a self-styled “caliphate” from Mosul in June 2014.