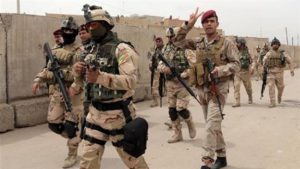 The number of Islamic State militants killed since the launch of Iraqi forces offensives to retake western Mosul has surpassed 900, the police service said as the army prepares to invade a strategic IS stronghold, like reported by iraqinews.com .

Federal Police chief, Lt. Gen. Shaker Jawdat, said in statements Tuesday that 929 Islamic State members were killed since operations began on February 19th to recapture the western side of the city.

According to Jawdat, 200 fighters were killed on Monday alone, adding that 84 booby-trapped vehicles and 3 drones were destroyed and brought down during battles.

Meanwhile, Maj. Gen. Najm al-Jubouri, commander of the army’s Nineveh Operations, said in a statement that the army’s 15th division were preparing to invade the town of Tal Afar, a strategic Islamic State stronghold in northwestern Mosul.

Iraqi forces recaptured eastern Mosul late January after three months of fighting to take over the city that fell in IS hands in 2014. The forces recently regained control over strategic areas in the western region, including the city’s airport, a major bridge and a handful of districts.