You are here: Home / MidEastGulf / Iraqi Army Aviation kills 60 ISIS elements in the city of Fallujah 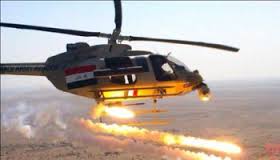 A security source in Anbar province announced on Sunday, that more than 60 elements of ISIS criminal gangs have been killed in the bombing of Iraqi Amy Aviation targeted their headquarters in the city of Fallujah.

The source said in a statement:”The army aviation bombed 14 sites belonging to ISIS in the city of Fallujah in Anbar province, noting that, “the bombing led to the deaths of more than 60 elements and leaders of ISIS criminal gangs. ”

The source, who asked to remain anonymous, added: “The operation was based on accurate intelligence of Baghdad Security Directorate.”