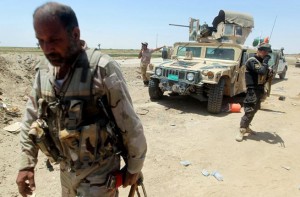 Iraqi government forces, backed by fighters from Popular Mobilization units, have carried out a series of clean-up operations across Iraq, killing dozens of ISIL militants.

A total of 23 ISIL extremists were killed after Iraqi security forces launched offensives in the al-Naeemia, Hitaween, Wadi al-Dhiban, Qaryat al-Sa’dan and al-Anaz regions of the town of al-Karmah, located 48 kilometers (30 miles) west of the capital, Baghdad, on Tuesday.

Iraqi security forces together with Popular Mobilization fighters also lobbed a number of rockets at ISIL positions in Fallujah, located roughly 69 kilometers (43 miles) west of Baghdad, killing five militants and destroying a warehouse where a considerable amount of weapons had been stockpiled.

Additionally, seven ISIL terrorists, among them a mastermind of terror attacks identified as Sabah al-Jumaili and three foreign engineers, were killed in the industrial park of Fallujah.

Separately, fighters from Albu Nimr, Albu Mahal and al-Ubaid tribes killed 11 ISIL terrorists as they repelled the militant assault on the Qaryat Sakran region of the troubled western province of al-Anbar.

The report does not refer to the casualties among Iraqi forces in their campaign against ISIL.