You are here: Home / MidEastGulf / Iraqi and Kurdish officials meet to plan ‘Zero Hour’ for battle of Mosul 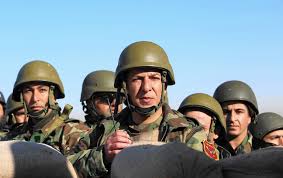 Iraqi and Kurdish officials have met to plan the long-delayed Battle of Mosul, an effort to push ISIS out of the city they have been using as their base of operations in Iraq.

“Upon the request of Naufal Hamadi, a delegation from the Nineveh provincial council visited the Kurdistan region for a meeting between Barzani and the new Mosul governor. [Barzani] expressed his fully support to the new Mosul governor and military plans to liberate Mosul,” announced Saido Shingali, an official from the Nineveh provincial council.

According to Shingali, Barzani told the Council, “Mosul is the second largest city in Iraq and has a long border with Kurdistan. We will coordinate with you and help you as much as we can.”

Iraqi and Kurdish officials are supposed to be setting a “zero hour” for the beginning of the Mosul campaign, although they have not announced a timeframe yet. There was much talk about a joint U.S.-Iraqi push to retake Mosul last summer, but it never happened. It is interesting that the Rudaw report does not mention any consultation with U.S. officials or military commanders.

On Tuesday, Kurdistan-based BasNews quoted a Shiite militia commander, Kareem al-Nouri, calling for cooperation between his group and the Kurdish Peshmerga to liberate Mosul. He was dismissive of the Iraqi National Guard, claiming the Shiite and Kurdish militias were the only effective fighting forces in the region.

Nouri accused the United States of delaying operations in Anbar province because “Washington wants the glory of liberating Anbar alone,” although he also conceded that the large number of civilians trapped in ISIS-held areas made military operations “more complicated.”

Another complication in Mosul is the return of hundreds of pilgrims from the annual hajj pilgrimage to Mecca. As the Associated Press reported on Thursday, the Islamic State seized the deeds to their homes before allowing them to leave, as insurance they would return to the captive city.

However, nearly 600 elderly pilgrims have been blocked from returning by Iraqi and Kurdish authorities, and left “squatting at a dusty, fly-infested mosque” for the past week, “with little food or medicine, and mounting fears for the fate of their families in Mosul and for their homes if they don’t return.” People below the age of 60 were not allowed to leave ISIS-held territory by the government in Baghdad.

The AP report says that no clear reason for their detention was given to the returning pilgrims, but some of them believe they were prevented from returning to Mosul because a military operation to retake the city is imminent.

They described their treatment by the Iraqi government as “inhumane,” while expressing weary acceptance of the ISIS presence in Mosul. “If we don’t bother them, they don’t bother us,” one pilgrim said.