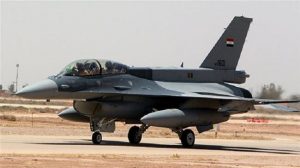 The Iraqi military has conducted airstrikes against the Islamic State group in Syria’s Deir el-Zour province, killing 40 terrorists, like reported by iraqinews.com.

Iraqi F-16 jets carried out a successful airstrike that targeted a weapons depot of the Islamic State group in al-Susah city in Deir al-Zour, leaving 10 terrorists dead, Dijlah TV channel quoted the Joint Operations Command as saying in a statement.

The operation resulted in the complete destruction of the Islamic State targets, the statement added.

Iraq had previously announced launching airstrikes against IS locations in Syria. This came after Abadi said security troops will follow IS militants in the whole region, not only in Iraq.

Thousands of Islamic State militants as well as Iraqi civilians were killed since a government campaign, backed by paramilitary troops and a U.S.-led international coalition, was launched in October 2016 to fight the militant group, which declared a self-styled “caliphate” from Mosul in June 2014.