You are here: Home / MidEastGulf / Iraqi air forces direct air strikes targeting the “Soldiers of the Caliphate” in Hit 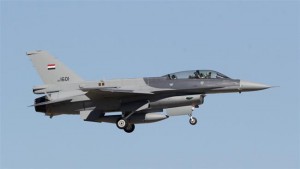 The cell said in a statement received by Shafaq News, that the joint operations in coordination with the Iraqi aircrafts implemented four strikes on specific sites in Hit district in Al-Muhammadi area.

The statement added that those strikes resulted in the destruction of a factory for manufacturing car bombs in Hit district / the industrial district, a store of ammunition and gear in Hit / al-Mohammadi area.

The statement pointed to shelling a gathering of ISIS terrorist elements called Soldiers of the Caliphate in Hit district / al-Muhammadi area, destroying a truck bomb ready to explode against our security forces.

The statement added that the results of strikes are as follows: the destruction of a truck bomb, killing the bomber and explosives expert while the latter was training the suicide on how to explode the truck bomb , and the occurrence of a very large explosion that killed a lot of members of the organization, including Abu Qatada Ansari, an expert in electrical connection and booby-trapping and the suicidal , Abu Zakaria Al-Ansari.

The statement pointed to the destruction of the organization’s meetings headquarters, killing 10 terrorists including:

The terrorist Mulla Yasin, a security leader in the state of the Euphrates.

The terrorist Abu Nawaf from a Saudi nationality.

The statement added that a factory of car bombs was destroyed entirely in the industrial district, and killed more than 15 terrorists.

Among the most important of all their dead:

The statement concluded that after these painful blows , we have been monitored a great case of confusion among members of the organization as they were transferring the remains of their dead, as a curfew was announced in Al-Muhammadi area completely, cut off the roads leading to it and the closure of Internet shops, as members of the organization observed at a late time looking for the bodies of their dead, which increased due to the explosive material stored in their headquarters.