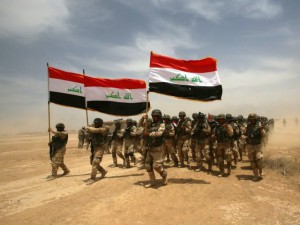 The armed forces of Iraq will directly attack their Turkish counterparts if the government of Turkey decides to deploy more troops to fight the Islamic State within that country, Iraqi officials have reportedly said, following blistering statements from Prime Minister Haider al-Abadi.

A “senior Iraqi security official” told the U.K.-based outlet Middle East Eye that the Shiite government in Baghdad would not hesitate to attack Turkish troops deployed there if they veer too close to Iraqi government strongholds.

“The Iraqi government seeks to make clear that there is absolutely no role for Turkish forces in the Iraqi sphere. Any movement or intervention by Turkish forces during the military operations [to re-take Mosul] would be faced with a very strong response,” he stated.

Ankara has expressed an enthusiastic desire to participate in the liberations of both Mosul and Raqqa, Syria, the “capitals” of the Islamic State in either country. “We are ready to give all kinds of support in the fight against Daesh [ISIS] in Mosul,” Foreign Minister Mevlüt Çavuşoğlu said on Friday, referring to the troops currently stationed in Iraq, against the wishes of the Iraqi government.

President Recep Tayyip Erdogan, in turn, has said that “Obama particularly wants to do something together [with us] about Raqqa. We have told him that this is not a problem for us.”

“From now on, we have to show that we exist in the region. We do not have an option to step back at this point,” Erdogan added, in statements last month.

Iraqi Prime Minister Haider al-Abadi said earlier this week that Turkey’s presence could spark a “regional war” in Iraq, and the Foreign Minister referred to Turkish troops as a “hostile occupying force.” Both nations summoned each other’s ambassadors over the incident. Middle East Eye quotes Deputy Prime Minister Numan Kurtulmus dismissing Iraqi protests, arguing, “No one has the right to object Turkey’s presence in Iraq when the country is fragmented that much.”

Iraq is currently divided among the Shiite government in Baghdad; the Kurdistan Regional Government (KRG) in the north; the Islamic State in Mosul; and a variety of both Sunni and Shiite roving jihadist militias.

The Shiite militias also told Middle East Eye that they will attack Turkish troops, with one leader saying, “we consider them an occupation force and we will deal with them on this basis.”

Prime Minister Binali Yıldırım has called the Iraqi government’s opposition to the Turkish presence in the country “dangerous and provocative.”

Turkey insists its troops are in Iraq at the behest of the KRG in Erbil. “It is clear from the very beginning that the [President Massoud] Barzani administration wanted the support of Turkish forces to train local forces to liberate Mosul,” Turkish government spokesman Numan Kurtulmus said earlier this month. “We will not allow this to be a matter of debate.” Al Monitor notes that the KRG has neither denied this nor enthusiastically embraced a Turkish presence in the region, stating only that they were aware of the troop deployment and did not object.

While Turkey is currently embroiled in a conflict with the Syrian Kurdish militias, which it claims are a wing of the Kurdistan Workers’ Party (PKK) terrorist group, it has enjoyed friendly relations with the Iraqi Kurdish government. Turkey fears that Syrian Kurdish groups will attempt to establish a sovereign Kurdistan using Turkish territory; a sovereign Kurdistan in modern-day Iraq would, on the other hand, not threaten the territorial integrity of Turkey. The KRG has long opposed the PKK and requested it evacuate Iraq.

The United Nations has weighed in on the conflict on behalf of Iraq. The Security Council – now led by Russia, an ally of Iran and Syria, the regional Shiite governments – issued a statement demanding Turkey respect “the principles of sovereignty, territorial integrity, and non-interference.”

Erdogan and his Russian counterpart Vladimir Putin have attempted to restore the bilateral relationship, however, and Putin will be traveling to Ankara on October 10.