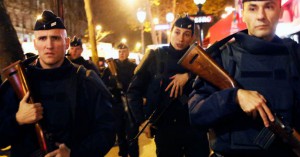 Iraqi intelligence sent a dispatch saying the group’s leader, Abu Bakr al-Baghdadi, had ordered an attack on coalition countries fighting against them in Iraq and Syria, as well as on Iran and Russia, through bombings or other attacks in the days ahead.

The dispatch said the Iraqis had no specific details on when or where the attack would take place, and a senior French security official told the AP that French intelligence gets this kind of communication “all the time” and “every day.”

Without commenting specifically on the Iraqi warning, a senior U.S. intelligence official said he was not aware of any threat information sent to Western governments that was specific enough to have thwarted the Paris attacks. Officials from the U.S., French and other Western governments have expressed worries for months about Islamic State-inspired attacks by militants who fought in Syria, the official noted. In recent weeks, the sense of danger had spiked.

Six senior Iraqi officials confirmed the information in the dispatch, a copy of which was obtained by the AP, and four of these intelligence officials said they also warned France specifically of a potential attack. Two officials told the AP that France was warned beforehand of details that French authorities have yet to make public.

“We have recovered information from our direct sources in the Islamic State terrorist organization about the orders issued by terrorist ‘Abu Bakr al-Baghdadi’ directing all members of the organization to implement an international attack that includes all coalition countries, in addition to Iran and the Russian Federation, through bombings or assassinations or hostage taking in the coming days. We do not have information on the date and place for implementing these terrorist operations at this time,” the Iraqi dispatch read in part.

Among the other warnings cited by Iraqi officials: that the Paris attacks appear to have been planned in Raqqa, Syria — the Islamic State’s de-facto capital — where the attackers were trained specifically for this operation and with the intention of sending them to France.

The officials also said a sleeper cell in France then met with the attackers after their training and helped them to execute the plan.

There were 24 people involved in the operation, they said: 19 attackers and five others in charge of logistics and planning.

The officials all spoke anonymously because they are not authorized to discuss the matter publicly.

The Islamic State group claimed responsibility on Saturday for the gun and bomb attacks on a stadium, a concert hall and Paris cafes that also wounded 350 people, 99 of them seriously. Seven of the attackers blew themselves up. Police have been searching intensively for accomplices.

Iraq’s Foreign Minister Ibrahim al-Jaafari, also told journalists in Vienna on Sunday that Iraqi intelligence agencies had obtained information that some countries would be targeted, including France, the United States and Iran, and had shared the intelligence with those countries.

Officials in the French presidential palace would not comment.

Every night, the head of French counterintelligence goes to bed asking ‘why not today?’ the French security official said.

The Iraqi government has been sharing intelligence with various coalition nations since they launched their airstrike campaign against the Islamic State group last year. In September, the Iraqi government also announced that it was part of an intelligence-sharing quartet with Russia, Iran and Syria for the purposes of undermining the militant group’s ability to make further battlefield gains.

A third of Iraq and Syria are now part of the self-styled caliphate declared by the Islamic State group last year. A U.S.-led coalition operating in Iraq and Syria is providing aerial support to allied ground forces in both countries, and they are arming and training Iraqi forces. The U.S. said it is also sending as many as 50 special forces to northern Syria.

Russia is also conducting airstrikes in Syria and recently endured a tragedy of its own when a Russian airplane was downed in a suspected bombing in Egypt last month, killing all 224 passengers onboard. The Islamic State group claimed responsibility for the attack.

U.S. Rep. Adam Schiff, the ranking member of the House Permanent Select Committee on Intelligence, said Sunday the attack was likely directed and funded out of Syria.

France has been on edge since January, when Islamic extremists attacked the satirical newspaper Charlie Hebdo, which had run cartoons of the Prophet Muhammad, and a kosher grocery. Twenty people died, including the three attackers. The Charlie Hebdo attackers claimed links to extremists in Yemen, while the kosher market attacker claimed ties to the Islamic State group.

At the time, France’s prime minister acknowledged “failings” in intelligence that led to the three-day spree of horror, as criticism mounted that the attacks might have been avoided if officials had been more alert to the deadly peril posed by suspects already on their radar.

Experts noted that several factors may have been behind the failures in January: Security services are drowning in data, overwhelmed by the quantity of people and emails they are expected to track, and hampered by the inability to make pre-emptive arrests in democratic countries. Criticism had focused on the failure to more closely follow the two brothers who carried out the attack on the Charlie Hebdo newspaper. One had been convicted on terrorism charges and the other was believed to have linked up with al-Qaida forces while in Yemen. Both were on the U.S. no-fly list, according to a senior U.S. official, because of their links to terrorist movements.

Bernard Bajolet, the head of the French spy service, spoke during a public appearance at George Washington University in Washington two weeks ago about the twin threats France was facing, both from its own extremists and “terrorist actions which are planned (and) ordered from outside or only through fighters coming back to our countries.”

General warnings about potential attacks from Iraqi intelligence or other Middle Eastern intelligence services are not uncommon, the official said. The French were already on high alert.

“During the last month we have disrupted a certain number of attacks in our territory,” Bajolet said. “But this doesn’t mean that we will be able all the time to disrupt such attacks.”

Obtaining intelligence about the Islamic State group has been no easy feat given difficulties accessing territory held by the radical Sunni group. Iraqi agencies generally rely on informants inside the group in both Iraq and Syria for information, but that is not always infallible. Last year, reports from Iraqi intelligence officials and the Iraqi government that al-Baghdadi was injured were later denied or contradicted.