You are here: Home / MidEastGulf / Iraq: US denounces Hashd al-Shaabi murders of civilians in Salahuddin province 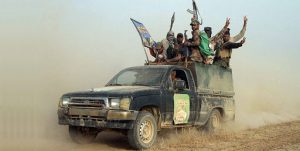 For the second time in three days, the US denounced the Popular Mobilization Forces, known in Arabic as the Hashd al-Shaabi, for their assaults on other Iraqis and called on the Baghdad government to establish control over the rogue groups, like reported bykurdistan24.net.

“This occurred within hours of an attack by Iran-backed militias on the Kurdistan Democratic Party’s branch office in Baghdad,” she continued.

Ortagus strongly condemned that attack on Sunday, affirming, “The destabilizing activities of Iran-backed militias operating outside of Government of Iraq control are inflaming ethnic and sectarian tensions and undermining democracy.”

The murders in Salahuddin occurred later on Saturday “within hours” of the attack on the KDP office, as Ortagus noted.

Police in the Balad district of Salahuddin province discovered the bodies of eight people out of a group of 12, all apparently Sunni Arabs, who had earlier been kidnapped. The Kurdish leadership immediately condemned those murders.

The governor of Salahuddin province blamed Asa’ib Ahl al-Haq, one of the more notorious Iranian-backed militias, for the assault.

Ortagus’ statement called on the Baghdad government “to immediately exert control over the Iran-backed militias,” which, as she charged, listing their serial aggressions against both Iraqis and foreigners alike, “are lawlessly attacking religious and ethnic minorities; peaceful protesters and activities; political party headquarters; and diplomatic missions.”

“The perpetrators of this violence must be brought to justice,” she affirmed. “The actions of these groups are preventing the international community from helping Iraq and are leading Iraq toward sectarian violence and instability.”

Tough US line on Iranian-backed militias

In response to militia attacks on US and Coalition targets, Secretary of State Mike Pompeo recently issued an extraordinary threat to the Iraqi government and those militias.

Pompeo warned both the Iraqi President, Barham Salih, and the Iraqi Prime Minister, Mustafa al-Kadhimi, that the government had to stop the attacks or else the US would close the embassy in Baghdad and launch a massive assault on the militias, singling out Asa’ib Ahl al-Haq and Kata’ib Hizbollah.

Notably, the militias responded with a ceasefire. They said it was for 40 days and conditional on the Iraqi government producing a timeline for the withdrawal of US forces.

However, since there has been no indication from Baghdad or Washington that such a plan is even being considered, the militias’ condition is likely a face-saving measure.

Moreover, the Hashd al-Shaabi recently suffered another setback. On Friday, the Iraqi government and the Kurdistan Regional Government (KRG) reached an agreement on a plan for coordinated security and administration in Sinjar, where the Shia militias, along with the Kurdistan Workers’ Party (PKK), have been dominant.

That agreement is a blow to both the Hashd al-Shaabi and the PKK. The PKK responded by assassinating a KRG border official in Duhok province.

Quite possibly, Saturday’s attacks by the Hashd al-Shaabi, both in Salahuddin province and on the KDP’s Baghdad office, are, at least in part, a response to that most recent setback.