You are here: Home / MidEastGulf / Iraq: US conducts airstrikes against Kata’ib Hezbollah sites 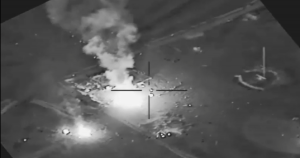 The US carried out airstrikes against multiple Iranian-backed militia sites in Iraq, according to the US Defense Department, CNN reported.

The strikes come one day after the US assessed an Iranian-backed group was responsible for a rocket attack on a base where coalition forces are located, killing two American service members and one British service member.

A US defense official told CNN that the strikes were carried out by manned aircraft and targeted five weapons storage facilities.

In a written statement, the Defense Department stated the strike was aimed at harming the ability of Kata’ib Hezbollah, an Iranian-sponsored Shia militia group, to conduct future strikes against American troops. The weapons storage facilities included areas where weapons used to attack American and coalition troops were stored.

“These strikes were defensive, proportional, and in direct response to the threat posed by Iranian-backed Shia militia groups (SMG) who continue to attack bases hosting OIR coalition forces,” the department statement read. A briefing on the attack is scheduled for Friday morning at the Pentagon.

The statement added, “These terror groups must cease their attacks on U.S. and coalition forces or face consequences at a time and place of our choosing. The US and the coalition remain committed to the lasting defeat of ISIS, and the long-term security, stability, and sovereignty of Iraq.”