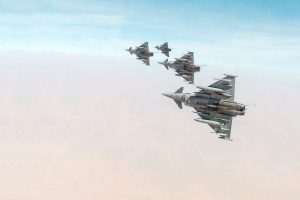 A strike in support of the Iraqi security forces was conducted by RAF aircraft on the 2nd of September, according to the Ministry of Defence.

In this instance, Islamic State had established a training camp in northern Iraq at a cluster of buildings in the desert, some 25 miles south-west of Ash Sharqat.

A coalition surveillance aircraft had kept a close watch on the site and confirmed that there was no sign of any civilians being present, whereupon all six targets were struck by the Typhoons.

This section is intended to provide a bit of background on British efforts in the region and if you’ve read it before, please remember others may not have.

By September last year, the Ministry of Defence had announced that over 1,000 personnel were engaged in theatre and that the Royal Air Force had conducted around 1,000 airstrikes, flying over 2,800 sorties, killing over 3,000 Islamic State fighters.

Last year, it was reported that the Royal Air Force was operating at its most intense for 25 years in a single theatre of operation which far outstripped the UK involvement in Iraq and Afghanistan – RAF jets have dropped 11 times more bombs (1,276 strikes) on Syria and Iraq in the preceding 12 months than they had in the busiest year of action in Afghanistan a decade previously.