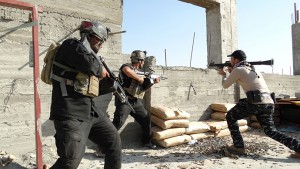 The commander of the Interior Ministry’s Quick Reaction Forces, Brig. Gen. Nassir al-Fartousi, told state TV Sunday that the Iraqi flag was raised on a local government building in Beiji and that troops were advancing, without elaborating.

There was no word on the fate of the contested refinery on the town’s outskirts.

Beiji, some 250 kilometers (155 miles) north of Baghdad, fell to the extremist IS group during its blitz across northern Iraq a year ago, but parts of the town and nearby refinery have since been retaken by government forces.