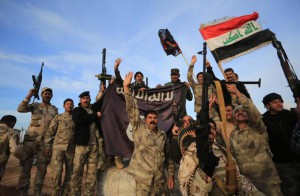 On Sunday, following days of heavy fighting against Iraqi government forces, ISIL took control of Ramadi, some 70 miles from Baghdad. Hundreds of Iraqi servicemen were killed and many more fled the city.

“The tribal mobilization… is designed to collect what will be the foundation of a national guard. So the Iraqis have already allocated resources, and there’s a list of weapons that are approved for about 8,000 of the tribal fighters in Anbar,” the official told reporters on Wednesday.

The process of building a national guard-style force will take a certain amount of time, but the Iraqi authorities are already moving forward with that, according to the official.

Iraq was also expected to recall some 24,000 police officers who had abandoned their posts, the official said.

The so-called Islamic State is a fake jihadist group that is currently in control of vast territories in Iraq and Syria, where it proclaimed a caliphate. The militant group is notorious for numerous human rights atrocities including mass killings and beheadings of foreign hostages posted online.