You are here: Home / MidEastGulf / Iraq, the future of militias after Islamic State

Iraq’s future stability will depend on how it manages its various militias, like reported by aljazeera.com 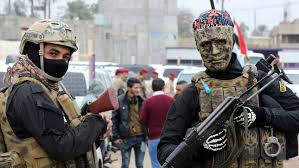 This week Iraqi prime-minister Haider al-Abadi concluded his first meeting with US President Donald Trump in Washington, DC, with Trump praising the “unprecedented cooperation” between the two countries in combating the Islamic State of Iraq and the Levant (ISIL).

Trump had promised to finish off ISIL thirty days into his presidency, but the battle for Mosul itself has dragged on longer than he anticipated. Trump’s account of his meeting with Abadi indicates that he was focused on the military aspect of the conflict, however, little was revealed about what post-conflict strategies, if any, the leaders discussed, such as the humanitarian crises and reconstruction of formerly ISIL-held territories.

A pressing issue that looms on the horizon related to Iraq’s post-ISIL recovery is the number of various Iraqi armed forces and the possibility of these forces turning on each other. What will happen to the myriad Iraqi Shia militias that emerged in response to the ISIL invasion of 2014?

Ironically, a call to demobilise all these militias has recently come from an unlikely source – Shia cleric Muqtada al-Sadr, who was the first to establish a Shia militia in Iraq in 2003. As of 2017, he is now trying to dismantle the numerous Shia militias that are active in the country. He is unlikely to succeed, but a need for reforming Iraq’s security forces is pressing.

The need for security sector reform

It was the arbitrary behaviour of the Iraqi security forces that alienated elements of Arab Sunni society before ISIL’s 2014 expansion, and the implementation of security sector reform (SSR) will be ever more salient after the liberation of Mosul.

Since 2003, elements among the security forces have been a threat to certain members of Iraq’s population. SSR refers to strategies that inculcate a professional ethos in these security institutions, where they would protect all of Iraq’s communities.

SSR would seek to curb behaviour such as arbitrary arrests, the abuse of Iraqi citizens at checkpoints and reprisal attacks, as wellm as countering pervasive corruption within security institutions.

The problem is that Iraq’s military forces are numerous, ranging from the regular army, the Ministry of Interior forces, the Kurdish Peshmerga, to the myriad of Shia militias and Arab Sunni tribal militias that have emerged since 2014, subsumed under the al-hashd al-shaabi or Popular Mobilization Units (PMU).

In terms of Iraq’s long-term stability, SSR is crucial for dealing with the immediate problems of internally displaced people, creating security for the reconstruction of the country and integrating areas formerly held by ISIL.

Many of the refugees, mostly Arab Sunnis, are wary of returning to a post-conflict Iraq where the Shia militias are in control of their towns and cities.

The Sadrist challenge to the Shia militias

The Iraqi Shia militias, or PMUs, mobilised in response to the fall of Mosul in 2014, and the question remains, as to whether they will stand downd once ISIL is expelled from this city.

Some Shia PMU leaders have said that their militias will continue fighting ISIL until they reach its capital in Raqqa.

Others will stay in Iraq and increase their power through the political process. However, militia commanders are precluded by Iraqi law from running for a parliamentary or cabinet position. A law passed in November 2016 established the PMU as an official security force, thus allowing these militia figures to take part in politics.

While it came as no surprise that Arab Sunni politicians opposed this law, so did Sadr. As of this month, his interpretation of SSR has been to call for the dismantlement of Iraq’s militias entirely.

Sadr had been one of the most polarising figures in Iraq, and members of his militia, the Mahdi Army, have been implicated in some of the worst sectarian bloodletting during the 2006-2008 civil war. He has now evolved into one of the few nationalist voices in Iraq, uniting with Iraqi communists and leftists in street protests, demanding reform of a Shia-dominated government.

While Sadr was the first to establish a Shia militia in 2003, he eventually lost control of the force he created, which splintered in numerous factions. Without saying it explicitly, he is trying to rein-in the hydra he created.

Sadr has weighed in on SSR, which in his opinion would ideally demobilise all militias. Demobilisation does not seem to be a possibility. While the Shia militias are villains to some, they are heroes to many.

SSR might simply become another elusive goal in Iraq, like national reconciliation, but for Iraq’s long-term stability it will be essential for restoring security and combating ISIL’s remnants.

The role of the US

There have been successes in regards to SSR in Iraq. The Counter-Terrorism Service (CTS), otherwise known as the Golden Division, was derogatorily referred to as former prime-minister Maliki’s “private army” in the past. But since the ISIL invasion, the force has reformed itself, bearing the brunt of most of the urban fighting in cities such as Fallujah, Ramadi and Mosul, and emerging as one of the few professional, inclusive Iraqi military institutions.

The CTS owes its success to the US military training it received in Iraq. This training mission has become more robust after the ISIL invasion. Washington will need to use this leverage to pressure for continued SSR, even after a military victory against ISIL.

However, SSR can only work with a combination of local pressure from inside Iraq, and by also bringing in regional players such as Iran, and Turkey, which has trained its own militia in its base in Bashiqa. Each of these neighbours have contributed to Iraq’s problem and will need to be part of the solution.