You are here: Home / MidEastGulf / Iraq: the arrest of drug suppliers belonging to ISIS in possession of 12 million narcotic pills 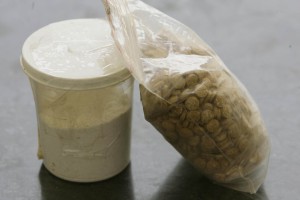 The investigation of Rusafa Court announced on Wednesday the arrest of a group responsible for the transmission of drugs belongs to ISIS organization , indicating that the investigation has shown that the seizure amount is estimated at 12 million tablets of hallucination which is a financial resource for the terrorist organization.

Judge Omar Khalil said in a statement received by Shafaq News, that “judicial efforts resulted in the arrest of those responsible for the supply of drug to the south and central regions, who are loyal to ISIS“.

Khalil said that “the group consisting of 3 terrorists have been arrested by the intelligence and counter-terrorism service south of Rusafa and was in possession of 12 million narcotic pills.”

He pointed out that “the arrest process took place in Ain al-Tamur region in Karbala province,” pointing out that “the investigation has shown that the drug is one of the main financial resources to ISIS”.