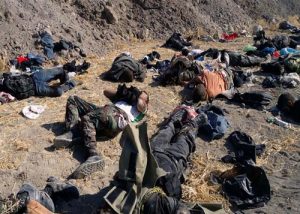 Tens of Islamic State members were killed during operations in north of Kirkuk, a commander said according to iraqinews.com.

“Security troops carried out an operation in north of Hawija, which left tens of militants killed,” Maj. Gen. Ali Fadel Mahran, commander of Kirkuk Operations Command, said in a statement on Sunday.

“Rest houses of IS and suicide belts were also destroyed during the operations,” he added.

In late October, operations were launched to liberate Qaim and Rawa towns, west of Anbar. Both have been held by the extremist group since 2014, when it occupied one third of Iraq to proclaim a self-styled Islamic “Caliphate”.

Brig. Gen. Yehia Rasool, spokesperson for the Joint Operations Command, announced on Friday, achieving “great victory” in Rawa, after the War Media Cell said operations launched on the dawn of Friday for the “liberation of Rawa”.

A government campaign, backed by paramilitary troops and the coalition has been fighting, since October 2016, the militant group, which declared a self-styled “caliphate” from Mosul.

The war against IS has so far displaced at least five million people. Thousands of others fled toward neighboring countries including Syria, Turkey and other European countries, since IS emerged to proclaim its self-styled “caliphate”.