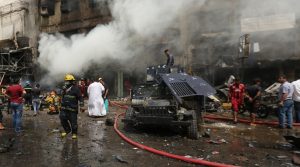 BasNews has learned that the explosive device was attached to a vehicle and went off on a street near the local administration of Kirkuk.

It has reportedly killed two people and wounded four others.

No groups or organizations have yet claimed responsibility for the attack, however, the Islamic State (IS) is suspected for being behind the terrorist attack.

The extremist group, despite being announced as defeated in Iraq, maintains presence in some areas in the north and west of the country.

The security situation remains dire in Kirkuk under the control of the Iraqi army and Iranian-backed militias of Hashd al-Shaabi. They pushed the Peshmerga forces out of Kirkuk in October 2017 following the political disputes between Erbil and Baghdad over Kurdistan’s referendum on independence.