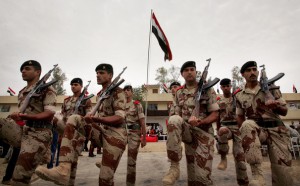 Reinforcements are being rushed to the key Beiji refinery in northern Iraq amid heavy fighting with ISIS militants who have been trying to capture the facility for months, Iraqi officials said Tuesday.

But Brig. Gen. Saad Maan, a spokesman for the Interior Ministry, denied during his appearance on state television that ISIS had taken over major parts of the refinery, the country’s largest, as some Iraqi media reported.

Aside from its commercial significance, Beiji is on the road to Mosul, Iraq’s second largest city and the main center of the ISIS’s power in Iraq. If Iraqi forces hope to eventually take back Mosul, they have to secure Beiji – the scene of stubborn fighting for months.

Ammar Hikmat, the deputy governor for Salahuddin province where the refinery is located, told The Associated Press that the troops holding the refinery have been battered since Monday by a wave of suicide bombings carried out by armored vehicles packed with explosives.

The government has several times said the refinery was under control, but militants have repeatedly counterattacked.

A spokesman for the provincial government, Adel al-Samaraie, said militants are in control of at least half the refinery and are seeking to cut the main supply line to the embattled troops holding the rest.

“They are advancing and taking over many areas,” al-Samaraie told The Associated Press in a phone interview, referring to the militants.

Iraqi state television devoted an hour-long program Tuesday to assert that the refinery was still in government hands. Maan asserted that “it is impossible for the militants to take over the refinery.”

In recent days, the Iraqi government has decried what it describes as a propaganda war by ISIS to exaggerate their advances. The extremist group, which has taken large parts of the north and west of the country, has issued statements online that it has control of most of the refinery.

The Iraqi government said Tuesday that a joint force of federal police and militias, known as popular mobilization units, are working to clear the road to the refinery. Beiji is north of Tikrit, which was retaken by Iraqi forces last month.

Reflecting the intensity of the fighting in the area, eight of the 22 airstrikes carried out Tuesday by U.S.-led coalition forces against ISIS were around Beiji.

In Baghdad, a car bomb exploded in the central Karrada commercial area killing six people, according to police and medical officials. The area where the car exploded included restaurants, shops and a Sunni mosque. The officials spoke on condition of anonymity because they were not authorized to release the information.

Baghdad, especially Karrada, which is popular for families at night, has been pounded by car bombs over the last few weeks.