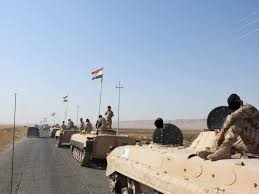 Iraq is deploying troops to areas along its border with Syria that are affected by the Turkish military incursion into the northern part of the country to block Islamic State insurgents from crossing into Iraqi territories, a security source told Kurdistan 24.

“There are movements to secure the 325-kilometer border” between the neighboring countries from the Iraqi side, the source said, on condition of anonymity. He added that the provincial security forces of Nineveh and Anbar—the only two Iraqi provinces that border Syria—are on alert.

Earlier on Sunday, he said, “Nineveh’s governor made a visit to the Rabia border crossing to study the situation.” The crossing is located in the northern part of Nineveh province and is manned on the Syrian side by the Syrian Democratic Forces (SDF) who are currently under attack from the north by Turkish forces.

Baghdad has yet to issue an official statement on the matter, but the move would follow assessments of the situation currently unfolding in northern and northeastern Syria, where Kurdish-led forces are based. Turkish ground troops, artillery fire, and aerial bombardment, as well as Turkish-backed Syrian Islamist groups, have slaughtered dozens of people and caused the displacement over two hundred thousand civilians.

The long-threatened Turkish invasion began on Wednesday with the purported aim of confronting the Kurdish military leadership of the SDF, the Peoples’ Protection Units (YPG), whom Ankara considers terrorists for alleged connections with the of the Kurdistan Workers’ Party (PKK). The PKK have led a decades-long insurgency inside Turkey for expanded Kurdish rights.

Ankara’s military campaign came after the White House withdrew American forces from strategic areas in northern Syria following a phone call between US President Donald Trump and Turkish President Recep Tayyip Erdogan. The Pentagon announced on Sunday it would remove its remaining troops in Syria.

Established to counter the so-called Islamic State, the SDF, backed by air support of the international anti-Islamic State coalition, was the leading ground force in Syria that freed close to a third of the country’s territory from the terrorist organization’s brutal rule. Made up of a diverse group of fighters, the SDF lost some 11,000 members in the fight against the extremist group.

As the SDF took back the last sliver of “caliphate” land in the eastern town of Baghouz in March, Iraq put up reinforcements on its side of the border to prevent fleeing militants from crossing into Anbar province.

Now, as Turkey pounds positions close to where Islamic State members and families are held, fears are mounting that they will have the opportunity to scatter to Iraq or join Turkish-backed militant groups. The security source told Kurdistan 24 that Baghdad is again strengthening its border presence to counteract possible infiltrations.

“The aim of the deployments is to secure the border in anticipation of the influx of Syrian refugees and also to deter any attempts by ISIS fugitives to infiltrate Nineveh.”

The international community, including the US Congress, has largely condemned Ankara’s incursion. Leading European powers have vowed to stop arms exports to their NATO ally of Turkey amid worries of war crimes committed by their army and proxy militias in Syria.

Late on Sunday, the SDF announced that it had reached a deal with the Syrian regime—whose indiscriminate killings of its citizens nearly a decade ago started the protracted national civil war—and Russia to enter two towns currently under attack to confront Turkish forces and their allies.