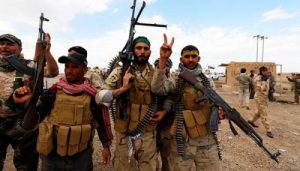 Iraqi security forces killed 65 Islamic State (IS) militants in a well-planned ambush in the province of Anbar, according to Iraqi sources.

IKH News quoted a military source who wished to remain anonymous, saying that the security forces were informed of a plot by the IS jihadists trying to penetrate into Iraq from Syria to conduct terrorists attacks.

“Immediately, a security force set up an ambush on a road in Ar-Rutbah town in western Anbar province, managing to kill all the 65 infiltrators, including foreign fighters,” the source told IKH News, adding that no Iraqi troops were killed or injured during the operation.

Even though, the Iraqi PM Haider al-Abadi announced in December the defeat of the IS in Iraq, the extremist group has began their activities in most of the liberated areas.