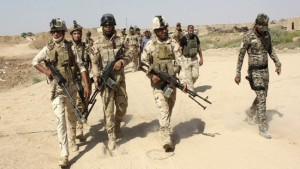 The leadership of al-Hashed al-Shaabi in Anbar Province announced on Monday, that the security forces cleansed the areas of al-Maamra and al-Hawda in Heet District in western Ramadi, while indicated that the operation resulted in the killing of 17 ISIS militants.

The officer in al-Hashed al-Shaabi in Haditha District Aycer Obeidi said in a statement obtained by IraqiNews.com, “The security forces carried out a wide-scale military operation and managed to cleanse al-Maamra and al-Hawda areas in the southern axis of Heet District after fierce battles with ISIS,” indicating that, “The operation resulted in the killing of 17 ISIS militants.”

Obeidi added, “The security forces reinforced its presence in the axes of Heet, and prepared to launch a storming operation in order to liberate the district from ISIS terrorist gangs,” pointing out that, “The security forces will also secure safe corridors for the exit of innocent civilians.”