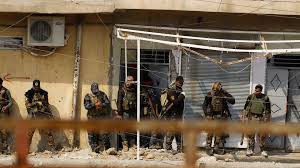 The raid was the most brazen action by Iraqi forces against a major Iran-backed militia group in years and targeted the faction, which US officials have accused of firing rockets at bases hosting US troops and other facilities in Iraq.

Iraqi government officials and paramilitary sources then gave contradicting versions of what followed.

The paramilitary sources and one government official said those detained were transferred shortly afterwards to the security branch of Iraq’s paramilitary umbrella grouping, the Popular Mobilization Forces (PMF).

The raid was the first sign that the government of new prime minister, Mustafa al-Kadhimi, intends to make good on pledges to take tough action against militia groups that have targeted US installations.

It took place after a number of rocket attacks near the US embassy in Baghdad and other US military sites in the country in recent weeks.

But the incident also highlighted how difficult it could be to take on the militias. A senior PMF official said after some negotiation, those detained were handed over to paramilitary security forces, reported Reuters.

One government official told Reuters three commanders of Kataib Hezbollah had been detained during the raid, carried out by Iraq’s elite Counter Terrorism Service. One of those commanders was an Iranian, he said.

A second PMF official said no commanders of Kataib Hezbollah were detained.

A spokesman for the US-led coalition in Iraq and Iraqi paramilitary sources denied any of those detained had been handed over to the US military, after a government official said three had been.

Tensions between Washington and Tehran especially on Iraqi soil have been high for at least a year.

Both Tehran and Washington supported Kadhimi in becoming prime minister in May.