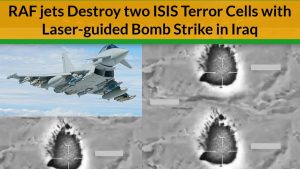 The attack comes just days after Iraq said an airstrike had killed an ISIS commander in Iraq who had claimed to be the leader of the terror group in the country.

A coalition surveillance aircraft had located a number of ISIS fighters on January 24 and the two fighter jets were tasked to strike them, according to a statement by the Ministry of Defence.

The pilots checked the area around the caves, which were a mile and a half apart, for any signs of civilians who could have been at risk. They then simultaneously launched two laser-guided bombs against each group.

‘All four of the bombs struck the targets accurately and the strike was assessed to have been a success in eliminating the terrorist threat’, the MoD said. They did not reveal how many casualties there were.

The airstrike is part of an effort to prevent any resurgence of ISIS in Iraq by supporting the Iraqi security forces.

The jihadists were driven out of their last remaining territory in Iraq more than three years ago but still pose a threat in the country, as demonstrated by an attack in Baghdad two weeks ago which killed 32 people and for which ISIS claimed responsibility.

The recent strike is the first British attack on ISIS targets since October 6 last year whereby a coalition airstrike killed ISIS terrorists who had attacked Iraqi security forces in the desert of Anbar province, west of Baghdad.

Last year in April, two British RAF Typhoon jets bombed six caves being used as a base for ISIS militants near Bayji.

The two fighter jets used Paveway IV guided bombs – the same used in the recent January 24 attack – to hit the the cave entrances during the night-time strike.

In a further setback for the terror group, Iraq said on Thursday ISIS commander Abu Yaser al-Issawi – who had declared himself the cell’s ‘deputy caliph’ – had been killed in a military strike.

Paying tribute to Iraq’s ‘heroic armed forces’, Kadhimi said: ‘I gave my word to pursue [ISIS] terrorists, we gave them a thundering response’.

Little is known about the Iraqi figure whose death was announced on Thursday, but ISIS figures have often been known to use noms de guerre to mask their true identities.

A similarly-named ‘Abu Yasser al-Ithawi’ was listed in a 2018 report as an ISIS operations commander in Iraq and a member of the terror group’s ‘delegated committee’.

The former ISIS leader, Abu Bakr al-Bahgdadi, also operated in Iraq and made his only known public appearance there when he declared the ‘caliphate’ in 2014.

He was killed in a US operation in Syria in late 2019, blowing himself up with a suicide vest after special forces pursued him into a dead-end tunnel.

The US government has identified Baghdadi’s successor as Amir Muhammad Sa’id Abdal-Rahman al-Mawla, previously affiliated to al-Qaeda in Iraq.

Washington says he ‘helped drive and justify the abduction, slaughter, and trafficking of the Yazidi religious minority in northwest Iraq’.

ISIS fighters had been driven from all the territory they held in Iraq by 2017 and lost their last patch of land in Syria in 2019.

But they have continued to wage a low-level insurgency against Iraqi forces and attack officials, mainly in northern areas.

Two weeks ago, they said they were behind an attack that killed at least 32 people in a crowded Baghdad market, Iraq’s first big suicide bombing for three years.

ISIS used a communications channel on Telegram to claim that two of their operatives had blown themselves up in Tayaran Square in the centre of Baghdad on January 21.

Health authorities said at least 110 people had been wounded after the attack, which left pools of blood and discarded clothes strewn over parts of the city.

One street vendor who witnessed the attack said a bomber had fallen to the ground and feigned a stomach problem before detonating his weapon.

Suicide attacks were once a regular occurrence in the Iraqi capital but normal life has largely returned, the pandemic aside, since ISIS fighters were driven away.

However, Iraq is now struggling through its worst economic crisis in years, deepened by last year’s collapse of oil prices and the coronavirus pandemic.

The January 21 attack took place in the same market that was struck in the last big atrocity, in January 2018, when at least 27 people were killed.

Such suicide attacks against civilians were also a near-daily tactic of insurgents during the US occupation of Iraq after the invasion that toppled Saddam Hussein.

They were later employed by Islamic State, whose fighters swept across a third of the country at their peak in 2014.