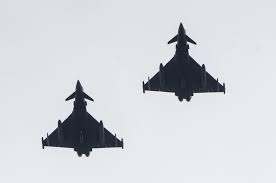 RAF fighter jets obliterated an ISIS cave complex with a deadly strike using new ‘Storm Shadow’ missiles, according to the Ministry of Defence.

The military aircraft also dumped laser-guided Paveway IV bombs during the missions that took place between March 10 and 14.

According to the MoD, Iraqi forces recently identified a ‘significant number’ of Daesh fighters using cave complexes south-west of Erbil.

The caves were thought to be ‘particularly difficult targets’ and two RAF Typhoon FGR4s were sent to carry out strikes in support of ground forces from the Iraqi Counter-Terrorism Service.

On Wednesday last week they completed the first attack using Storm Shadow missiles, and the aircraft’s weapons were said to have ‘struck their targets precisely.’

RAF aircraft were again in action on Friday, when they struck another group of caves used by Daesh, with eight Paveway bombs.

Lastly on Sunday six of the bombs were used to smash caves in the same remote, mountainous area.

The MoD said: “On each occasion, our aircrew have exercised their utmost care in checking there were no signs of civilians in the area before conducting the strikes and subsequent surveillance to ensure their successful completion.”

The first time the Storm Shadow missiles were used was in 2016 when RAF warplanes pulverised a massive Islamic State bunker complex in western Iraq.

The long-range “fire and forget” missiles were designed as bunker busters capable of penetrating underground facilities.