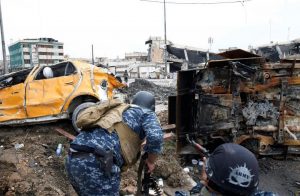 Iraqi Federal Police service said Thursday its troops killed 50 Islamic State members during operations to recapture one district in the town of Tal Afar, the group’s last bastion in Nineveh province, like reported by iraqinews.com.

The service’s chief, Lt. Gen. Shaker Jawdat, said the militants were killed while the forces cleared the Kefah al-Shamali (northern) district west of Tal Afar. He said five booby-trapped vehicles and 40 explosive devices belonging to the group were also destroyed in the operations. Other weaponry were also seized, he added.

Iraqi Prime Minister Haider al-Abadi declared early Sunday the launch of operations to recapture the enclave where military commanders believe up to 2000 fighters are deployed.

Over the past few days, Iraqi field commanders reported progress on the ground, saying government and paramilitary troops had reached the center of the town. Military media said Wednesday that forces told militants through loudspeakers to either surrender or face death.

The United Nations says 40.000 civilians had fled the town while 30.000 are believed to be stranded inside.

The Iraqi government plans to wage further offensives at other IS holdouts in Anbar, Kirkuk and Salahuddin once it is done with the recapture of Tal Afar, which commanders predict to be achieved soon.