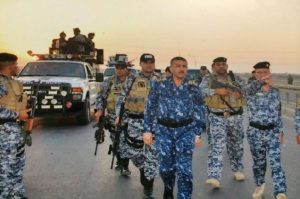 Lt. Gen. Shaker Jawdat said in a statement that his forces recaptured Bab al-Jadid and Bab al-Bid neighborhood. The troops recaptured Nineveh’s railway station and a nearby garage a few hours earlier.

“The Rapid Response forces recaptured 90 percent of the Old City and became 100 meters away from the Old Bridge,” Jawdat stated, referring to one of the five strategic bridges linking western and eastern Mosul above the Tigris River.

Iraqi generals view the Old City, with its narrow alleyways and dense population, as a major target whose recapture could be highly decisive for the outcome of operations in the western region of Mosul.

Iraqi government forces recaptured eastern Mosul from Islamic State on January 24th after three months of battles. Security commanders recently said they became in control of 30 percent of western Mosul since another offensive launched in February to retake the region.

Iraqi troops have made remarkable victories in the west by recapturing major government facilities, a military base and the city’s airport.