You are here: Home / MidEastGulf / Iraq poised to deploy Iran-backed Shi’ite militia in offensive in West 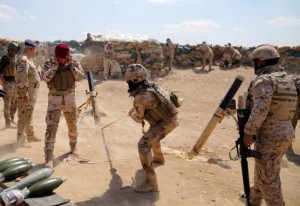 Iraq is poised to deploy Shi’ite paramilitaries backed by Iran to Sunni tribal areas west of Baghdad, a move supporters say is needed to defeat Islamic State militants but opponents say could inflame more sectarian violence, according to Reuters.

So far, however, the government has avoided deploying the militia in the Euphrates River valley province of Anbar west of the capital, a vast Sunni tribal homeland that strides the main routes to Jordan and Syria. Baghdad considers Anbar the next target in its campaign to retake territory from the militants.

But with the army advance having faltered, officials are now speaking openly about dispatching the militia, organized under the umbrella of “Hashid Shaabi” – “Popular Mobilisation”.

This could alarm the United States, which is supporting the Iraqi government from the air against Islamic State fighters but is wary of Baghdad’s alliance with Shi’ite militiamen who openly receive arms, funds and strategic direction from Iran.

Some Anbar tribal figures fighting on the government side against Islamic State, also known as ISIS or ISIL, have issued calls in recent days for Baghdad to send the militia to their aid.

“We must recognize that it will be too difficult for tribal fighters and security forces to defeat IS in Anbar,” said Sheikh Ahmed al-Assafi, who commands a group of tribesmen fighting the militants and who met Shi’ite militia commander Qais al-Khazali to discuss the participation of the Hashid Shaabi in Anbar.

But others say this would be a dangerous mistake, provoking tribesmen to rally behind Islamic State, which presents itself as a defender against Shi’ite militiamen responsible for atrocities.

“If the Hashid enters (Anbar), in whatever guise, the situation will not stabilize,” said Sheikh Ali Hammad, who fled to the northern Kurdish region from Fallujah, an Anbar city just west of Baghdad that is now largely held by Islamic State.

After prevailing over the insurgents in Tikrit this month, the Iraqi government declared it would take them on in Anbar next, before turning to the northern city of Mosul.

But the new campaign had barely begun when the insurgents went on the offensive in Anbar, exposing the ongoing dysfunction of an army that partly collapsed last summer.

The banks of the Euphrates, where tribes have been hostile to outsiders for centuries, have proven a more challenging environment for government forces than the Tigris valley around Tikrit.

Government forces hold only small, isolated pockets of territory that are difficult to resupply and vulnerable to attack by militants, who are familiar with the terrain and have the strategic advantage of holding waterways and roads.

An army officer whose troops are fighting in Anbar said the militants were “everywhere”.

“We are under tremendous pressure,” the officer said. “We are in the midst of a war of attrition, which I am afraid will play into the hands of IS.”

Iraqi security expert Hisham al-Hashemi said combat in Anbar regularly sees Iraqi troops run short on supplies and lose momentum: “This forces them to retreat, and this scenario has been recurring for the past 16 months,” he said.

Washington encourages the Baghdad government to repeat the tactics it employed in Anbar during the “surge” campaign of 2006-07, when U.S. marines turned the tide against al Qaeda fighters – forerunners of Islamic State – by arming and paying local tribes in a movement known as the “Anbar Awakening”.

But pledges by the government to arm the tribes have not fully materialized, in part due to a lack of trust between the two sides. Even if the tribes were armed, Islamic State has worked to prevent the emergence of a new “Awakening” movement by killing off sheikhs and fracturing the tribes.

“It’s a multi-pronged effort by ISIS to weaken the tribes, and that’s why it has been difficult until now for another strong tribal force to emerge in Anbar,” said Ahmed Ali, an expert in tribal dynamics in Iraq.

During the recent campaign in Tikrit, Shi’ite militia fought on the front line, with a general from Iran’s Revolutionary Guard openly leading them on the battlefield. After the city was captured, the militia were accused of looting and burning the property of local Sunnis, which they deny.

Washington, which fought simultaneously against the Shi’ite militia and the Sunni insurgents during its eight year occupation that ended in 2011, has clearly been wary of the role of the militia against the common IS enemy.

Hamid Hashem, a provincial council member, said he attended a meeting at the weekend between Prime Minister Haidar al-Abadi, his defense minister and the U.S. ambassador to Iraq. The United States made its support for the Anbar campaign conditional on the participation only of groups under the direct command of Baghdad, Hashem said.

But Baghdad-based analyst Jasim al-Bahadli, an expert on Shi’ite armed groups, said deploying the Hashid Shaabi to Anbar would make both military and political sense for Abadi.

“Excluding them will have undesired consequences and give an opportunity for the Hashid to show clear opposition to Abadi’s government,” Bahadli said. “That is the last thing Abadi needs.”

Hadi al-Amiri, a Shi’ite lawmaker who heads the most powerful armed faction within the Hashid Shaabi, dismissed the objections and said he had a mandate from eighty Anbar tribal leaders to join the fight in the province.

“We will fight in Anbar without waiting for permission from anyone,” Amiri told state TV on Wednesday. “We will go, not as a favor, but as a patriotic, ethical and religious duty towards our people in Anbar.”