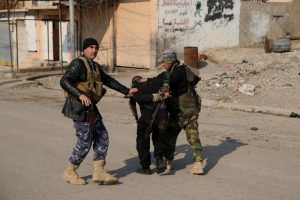 Mawazin News quoted the source saying that the militants were arrested over the past four days while attempting to flee the enclave towards Peshmerga-held territories.

According to the same source, more than 600 civilians, mostly Turkmen, had fled Tal Afar towards Peshmerga deployments.

Iraqi PM Haider al-Abadi and his defense officials have marked Tal Afar as their next target of anti-Islamic State action. Iraqi defense officials said recently that warplanes were carrying out raids on the enclave in preparation for the ground invasion which is yet to be scheduled.

Tal Afar has reportedly seen divisions among Islamic State leaderships, with occasional news telling of power conflicts and dissents among leaders, as well as attempts by some militants to flee the anticipated battle field.

Since Iraqi forces launched a wide-scale campaign to retake Mosul in 2016, paramilitary troops managed to isolate the town from the Syrian borders and from the rest of Nineveh.